With over 25 years of touring and recording under his belt, Boston-based blues guitarist Monster Mike Welch is considered a seasoned veteran of the international blues scene despite his relatively young age. Given the nickname “Monster Mike” by actor/Ghostbuster Dan Aykroyd at the tender age of 13, Welch has since carved out a niche as a highly accomplished and in-demand guitarist. To date, Welch has released six albums under his own name and in 2001, he joined the ranks of one of New England’s most beloved blues institutions, Sugar Ray and the Bluetones, where he stayed until 2017, recording five albums and racking up multiple Blues Music Award nominations for the band in that time.

In addition, Welch has recorded with Shemekia Copeland, Ronnie Earl, Danielle Nicole, Duke Robillard, Johnny Winter, Victor Wainwright, Nick Moss, the Mannish Boys and Sugaray Rayford, among others. Welch left the Bluetones in 2017 to focus on his partnership with Mike Ledbetter, which led to seven Blues Music Award nominations and the formation of the Welch Ledbetter Connection within the first year. Welch has received three consecutive Blues Music Award nominations by the Blues Foundation for Instrumentalist-Guitar beginning in 2016, a Boston Music Award for Best Blues Act, and is an inductee of the Rhode Island Music Hall Of Fame. 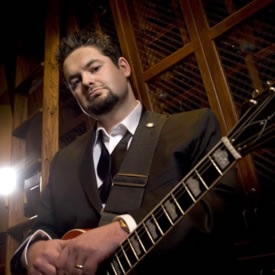