Scot was born and raised in the heart of the Midwest. He started playing electric bass in his early teens then picked up the acoustic bass a few years later. Although Scot claims to be self-taught, he has had several incredible teachers and mentors to help him hone his craft. Scot prides himself in being versatile and open-minded with regard to all musical genres, which manifests itself in his playing. Among his early influences Scot counts Donald “Duck” Dunn, James Jamerson, Jack Meyers, George Porter Jr., Jaco Pastorius, Jerry Jemmott, Willie Weeks, Rocco Prestia, Tommy Cogbill, Paul Jackson, Bootsy Collins, and Willie Dixon – to name a few…

Scot has been recognized by the Blues Foundation with a Blues Music Award nomination for Bass Player of the Year in 2013, and has been honored with a BMA for Band of the Year (Tommy Castro Band) in 2010. Numerous albums on which Scot has performed have also been nominated for and/or won BMAs. Most recently, Scot has been inducted into the Blues Hall of Fame in his home state of Iowa. 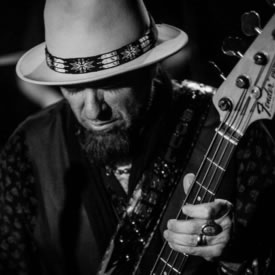